When I work on a prototype, my entire concentration is often focused on a game mechanism that I want to develop — but with Akropolis, this process happened differently. I was instead thrust into the challenge of making a game that would be very easy to understand, but also offer a true complexity of choices.

This desire came from playing The Builders, a game by Frédéric Henry, with my son. During the game, I was impressed by (and envious of) the simplicity and fluidity of the gameplay. At the time, I was working on several rather complex prototypes, and I realized what I really wanted to do was create a game that was as fluid as The Builders! Now I had my goal...but the infinite possibilities weren't really helping me achieve it. 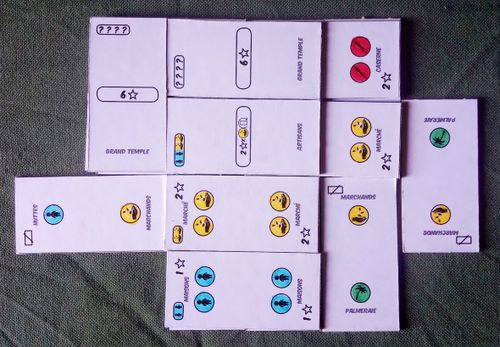 Since I was influenced by The Builders system, my first ideas involved a system of resource conversion — this game had players become alchemists — in which you had to "crush" resources on cards by placing the cards that needed these resources on top of them. This idea of creating a resource management game without resource tokens really appealed to me!

The experience wasn't incredibly satisfying, but I liked the minimalism of the components. However, this became the founding principle of what would be Akropolis: stacking the game pieces! As soon as I started testing this stacking notion, this mechanism immediately began echoing with a game design philosophy I'd had in mind for a long time. This philosophy would lead to a very specific development approach for Akropolis, which I call "The Cake"!

The Cake represents the act of construction you will do during the game and the structures each player sees at the end of the game, with you very proudly proclaiming, "Nice, I built that!" It's a very basic sentiment, but it's this pleasure that I wanted to nurture in each player during the game: the satisfaction of creating a unique object that will differ in every single game (and therefore be very personal), and which also represents the choices each player made on their turns. 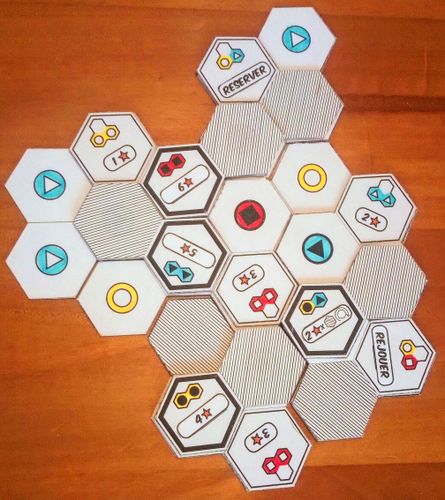 This was essential during Akropolis' development: Knowing that it was this exact feeling I wanted to reach! There were very many incarnations of the prototype, with so many variations over the course of two years that some prototypes had hardly anything in common with each other — but the important thing was that I always had this little voice in the back of my head that told me which direction to go. That little
voice wanted a "cake".

I borrowed the idea of this little voice, which made sure our objective was clear during the entire creative process, from Fumito Ueda, an amazing game designer who influenced an entire generation of video game designers through his work on the game Ico and his incredible thirst for refining gameplay.

At that time, and for a long time, Akropolis was called "Uruk", named after a city with an orthogonal layout that was built on several stories (in addition to it being the first human metropolis, founded eight thousand years ago in Mesopotamia). This aligned perfectly with the prototype since at this point in development, the tiles were squares instead of hexagons. Quickly though, I changed the shape of the tiles to allow much greater flexibility to their placement options. 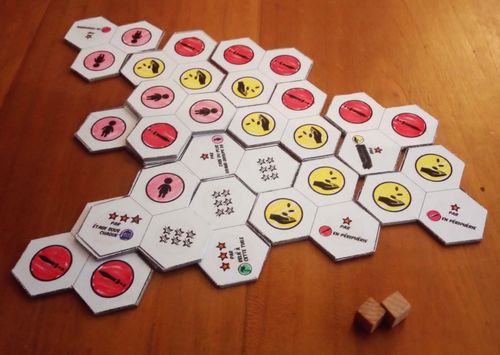 With the idea of the "cake", I wanted players to look upon their cities at the end of the game and imagine having built an entire city with a logical urban structure. Using my experience as an architect, I looked for what the districts of this city could be and what rules might exist that would let these districts be placed logically.

These building rules were the final point in developing the gameplay experience. I didn't want to leave players frozen with too many options. I didn't want to have the "carte blanche" feeling in which you don't quite know where to start to build your perfect city. Instead, it was much more practical to introduce placement rules that told you simply how to gain points if you followed them. Now, we asked the player to make choices that would give them the highest score, and in doing so create a realistic city.

All these different aspects were the backbone of Akropolis' design. Over the next two years, I worked on various prototypes to make all these different notions come together. Several friends and playtesters helped me tremendously with my tweaks to improve the prototype, whether that was by pointing out weaknesses or magnifying the fun parts. Thanks for all your help! I would not be so satisfied with Akropolis without all your helpful comments. 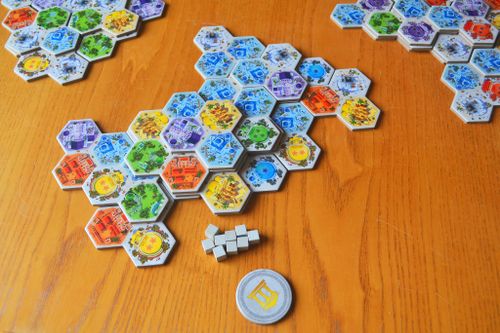 So many layers on that cake...

Among all of these improvements were several attempts to simplify how players manipulated the "river" of tiles. It was Benoit Turpin, designer of Welcome To..., who had the amazing idea to increase the value of tiles the higher they were placed.

Then it was time to work with Gigamic, collaborating with project manager Delphine Brennan, and to refine the balance of all these mechanisms. The development finally ended after an incredible day with the Gigamic team, validating all the final rules around managing the "quarries", "stones", and the river. There was also a storm of tests with the "expert" variants. Thank you, Delphine and Gigamic, for your amazing publishing work!!!

Today, I'm so happy with all of the work that went into Akropolis, and I'm surprised that I still love the game each time I play it. It's exactly the sort of cake I wanted to bring to your table! Whether you bought a copy at Origins Game Fair, Gen Con, or your local game store, I hope you enjoy it — and if you're so inclined, check out the solo mode rules that were recently published on BoardGameGeek.