Hello, everyone! Please allow me to introduce myself, Yohan Lemonnier, and my co-designer of Critical: Foundation – Season 1, Kristoff Valla.

What should I tell you about Kristoff? Well, he is a rather complex dish. You start off by taking a mature, cultured man — yes, he's a little older than me — then blend in an outstanding writing talent, add a generous dose of kindness, and sprinkle a near-encyclopedic knowledge of roguelikes into the mix. Set the oven to "friendship," and let cook for ten years. The dish is always served with a tall glass of vintage humor and is a total delight.

And as for me, I asked Kristoff to help me out, and he offered me this:

So: Yohan? Do you know Tic and Tac? [Editor's note: Tic and Tac are the French names of the chipmunks known in the U.S. as Chip and Dale.]

TIC: Talent (for inventing game systems), Imagination (ten ideas per minute; just try to keep up!), and Competence (from conceptualization to realization, he’s involved in everything).

TAC: Tirelessly hardworking (fully invested), Adorable (a funny and lovely guy), and Crazy (you had to be to get involved in this project). In short, Yohan is the gifted version of the two squirrels whose only desire is to invent thousands of games to entertain everyone until the end of time. Enough about us — let's talk about the game, starting with an overview of what it is:

It's 2035, and the world has changed little. Huge multinationals have taken over, and nanotechnologies are part of everyday life. Icarus was created to respond to the new challenges that this new way of life brings. Its goal: Investigate sensitive cases and undertake delicate operations.

Critical: Foundation – Season 1 is constructed like a television series, with each of the nine episodes taking thirty minutes to play. You can take on the role of Game Master, who directs the adventure, or play as one of the characters to put yourself in the story. The game provides an RPG-style experience with board game scaffolding via character cards and dice-based combat.

Critical: Foundation was really a team effort. Kristoff and I are the starting point of the Critical universe and of the scenario — yes, they're both from our sick brains — but Pascal Quidault and Joseph Foussat are the two other musketeers, without whom this project could never have reached its current heights.

Kristoff and I respect Pascal's work immensely, and it had been a personal dream of mine for years to be able to work with him. His fleshing-out of the universe allowed us plenty of room for new ideas, creating a very stimulating back-and-forth — and the easter eggs hidden here and there in the illustrations are delicious! ﻿Joseph GM'ing Critical during an event

Joseph, for his part, plays the role of the "slacker" of the group. (His words, not mine!) In real terms, he is the one who is able to see the whole picture, the bird's eye view of the project, while we have our noses to the grindstone. This ensures consistency throughout the project. To use the "TV-series" metaphor that Critical is built on, we are the writers, and he is the showrunner. The Gigamic team also worked very hard on the testing. (A little thought for those of you who found yourselves being GMs when you'd never been near a role-playing game before!)

How does one explain quickly and in simple terms what role-playing is to someone who is unfamiliar with this hobby? How does one make this activity readable, accessible, and fun? I've been circling around this question for years... It's like trying to describe music to someone who has never listened to it.

Because a good example is better than a long speech, in the summer of 2019, I cobbled together a prototype of an RPG that could be played in fifteen minutes anywhere. It was called "15min Chrono", and it was very TV-series oriented, with ellipses at every turn in order to focus on only the key moments. Each player was given a card (a very caricatural archetype). There were about twenty cards of specific situations for the Game Master (GM) that described a single, intense scene: the smugglers are going to escape in a boat, the space station is about to explode, the cult is going to carry out a sacrifice... There were key words, improvisation prompts for the GM, and that's about it.

That was the idea: to play a scene quickly, to drop the players into the midst of a situation whilst they sipped a beer. It worked well, but it required an experienced GM. I quickly told Kristoff about it to get his input, and it went to the top of his to-do list. We put ourselves to work on developing each scene, and I went to the Nürnberg trade show with an unfinished but playable prototype under my arm. 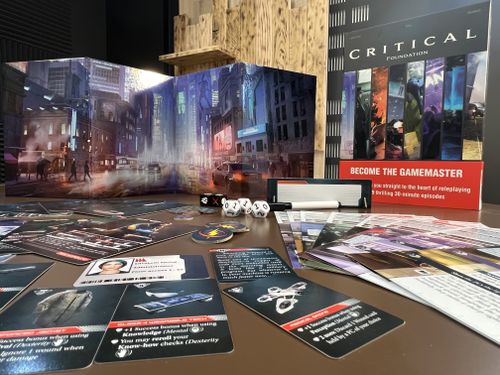 At this trade show, which inevitably evokes Santa Claus's workshop with its huge halls dedicated to games and toys, I had meeting after meeting with publishers. I showed "15min Chrono" to some of them, but during the meeting with Joseph (my future project manager) at Gigamic, I hesitated. Should I bother submitting this prototype to them? Why offer them this game, knowing that RPGs are not at all in their company DNA? I did it anyway, mostly because I know Joseph a little bit, and I thought it could at least intrigue his roguelike soul. Timing and luck had it that internally they had been thinking for a while about starting a role-playing game publishing business. That same evening (a rare occurrence), the game was signed.

What followed was two years of evolution, testing, and writing to come up with a game that was very different from the prototype, but faithful to the initial idea. Our real challenge with this game was to allow a novice player to become a novice GM in only a few minutes. Each thirty-minute scenario opens up new playful perspectives by incorporating, in small steps, all the rules and potentialities of this unusual hobby. Once ¾ of the campaign was played, tests proved that the GMs were even able to improvise on the hyper-detailed plot we'd provided them. 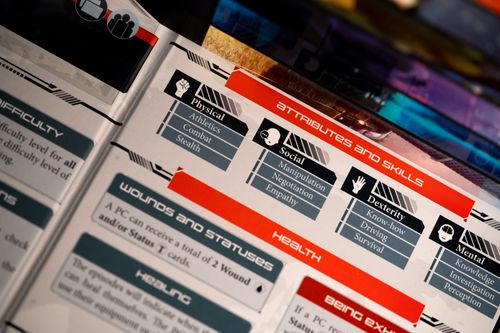 The last stretch was really intense. After re-reading all the texts, we went over everything in detail to be sure that there were no inconsistencies in dates or names. We made sure that the "pedagogical" progression for the beginner GM was optimal. We checked, with the final materials in hand, that the little puzzles that required manipulation — I won't say any more: no spoilers! — that the game contains worked.

We also can't forget that Critical is two universes, and therefore two games, developed in parallel: Foundation (a dystopian universe) and Sanctuary (a fantasy universe). So it's a constant turning wheel of creation and testing. As I write these lines, we're busy writing Season 2 of each universe which, I hope, will be released in 2023 if the game's success allows for it. We're also working on additional content that we hope to make available to the community for free. 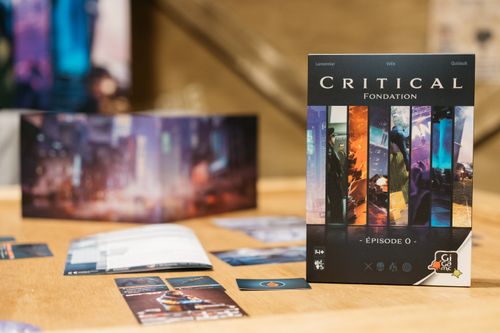 Bonus Episode 0 for promotion at conventions

Despite all this work, the real judges will be the players. We're crossing our butts (yeah, it's pretty acrobatic) in the hopes that the game will please you all. As designers, we have the feeling (and this is not necessarily the case on all projects) that we are really part of the Gigamic team and that we are working hand-in-hand with them, whether on the development or the promotion of the game.

This is the first time either of us had co-designed something, and we learned a lot about it. Co-designing is a bit like being in a couple. There can be periods of tension and moments of happiness. With Kristoff, we never disagreed. We always bounced ideas off each other. To me, there are only benefits to doing shared creative work. Two brains are better than one, for one thing, and it helps us to feel motivated in moments when we feel less inspired, if only to avoid disappointing our teammate. Pessimists will focus on the fact that we have to share the money. Well, yes, but more importantly, you share incredible moments, and you can count on someone who is as invested as you are...and that's priceless.

On Critical, Joseph was the third in a power trio with the two of us. He made significant contributions, and even if it's a cliché, he clearly knew how to get the best out of us. Another huge advantage of working with Kristoff is that in addition to being a writer of RPGs, he's also a talented novelist. And sure enough, in terms of story construction and reworking some of the tricky narrative passages, that really makes a difference. 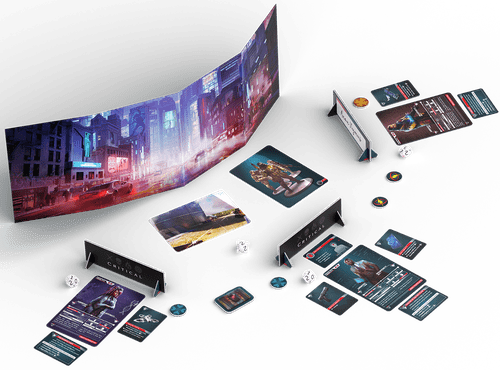 That's the story of Critical, but before I leave you, I'll share a little anecdote about the game's development, and the necessity of having a flexible team: Originally, the action in the game's tutorial took place in the Ural Mountains in Russia. The scene was based on a joint operation between the American and Russian armies. Well, certain things happened on the international stage, and after playing this scenario at the Cannes game convention in 2022, we noticed that the players' reactions and the feedback from international distributors were in line with our feelings: It was impossible to put the Russian army in an allied role.

But the production was already partly launched, so we had to slam on the brakes and make visual and narrative adjustments to move the action to Alaska. This change also had a marginal impact on some of the campaign scenarios. Again, we made sure to modify the entire campaign to make this change in a hurry. 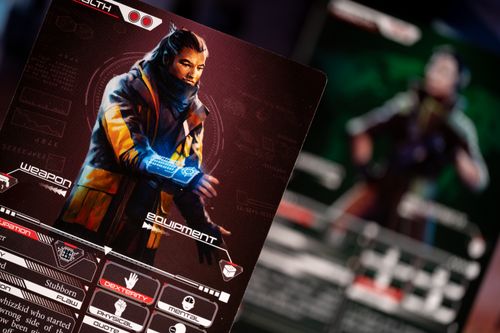